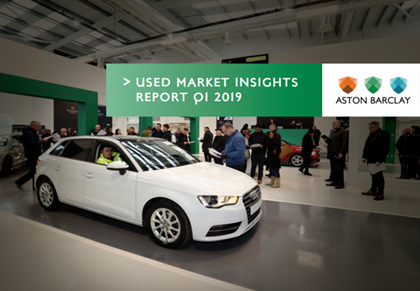 The used car market has remained relatively unscathed during Q1 2019 despite the challenges faced by the UK economy according to Aston Barclay’s latest Used Market Insights Report.

While new car registrations fell by 2.4% (Jan-to-March), the biggest changes within the used sector were the Q1 price reductions within the late and low and fleet sectors; as well as prices for hybrid/EVs reaching an all-time high.

The fleet market too has shown the first signs of the contract extensions caused by the Worldwide Harmonised Light Vehicle Test Procedure (WLTP) introduction last September – with average age and mileage up by 0.7 months to 42.5 months and 9.8% to 54,013 miles respectively.

Commenting on the findings, Martin Potter, group managing director of Aston Barclay said: “Q1 2019 has again proved the resilience of the used car market and there are further signs that EVs and hybrids are gaining in popularity, although volumes in the auction hall are still low.

“Q2 is likely to be slightly trickier for the used car market faced with the start of the bank holiday season, and the additional volume coming into the wholesale market from a strong March plate-change which traditionally causes pressure on pricing.”